Hitting shelves in May 2017, Mars M&M’s has been busy promoting their new Caramel M&M. According to sources, development of a chocolate and caramel combination took years to perfect, because the “lentil” inside each M&M candy had never been filled with such a soft center. Engineers had to figure out how to keep the chocolate at the right consistency so it wouldn’t melt or collapse. The team behind M&Ms, which turned 75 this year, says it’s one of the biggest launches in its history.

Check out some of the displays below used to promote the caramel M&M’s and other popular Mars candy products. The comments and photos were provided by FixturesCloseUp. 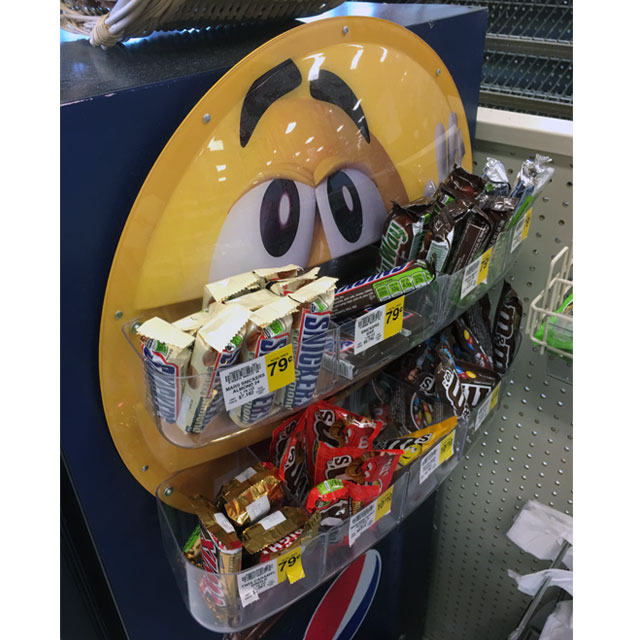 The famous mascot character Yellow provides focus and a splash of color for this M&M’s Yellow Magnetic Mount Tray Concept. Yes it could be adhesive mount or screwed to a surface with threaded fasteners, but what retailer would commit to such permanence? But to mount magnetically (to the side of a cooler here) is far more acceptable than those permanent options. Yellow is presently hawking the new Carmel M&M’s but generously grants space to Snickers, Milkyway, and various M&M’s lines. Though not much of the Yellow is seen, the yellow itself and his eyes are really all that is necessary as attention compellers. 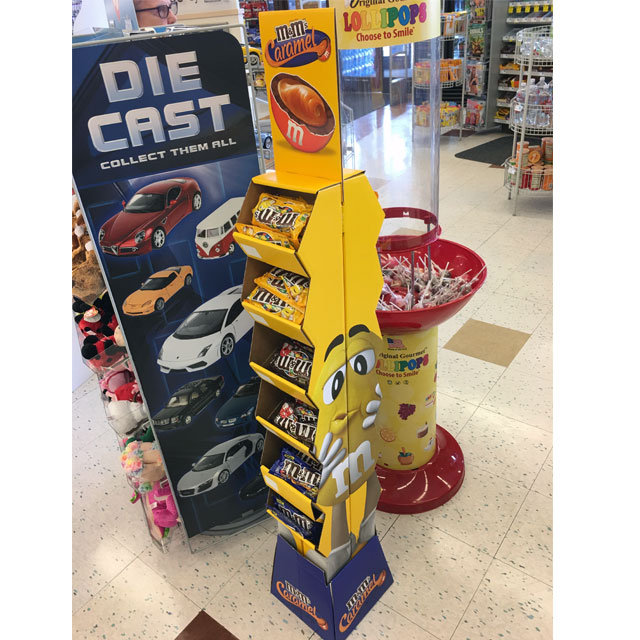 Visible by virtue of its sheer verticality and yellow color, this M&M’s Caramel Corrugated Tower floor stand pitches the new “flavor” along with traditional M&M’s on its lower levels. Though caramel flavor, the mainstream Yellow character mascot (yes, they are named by color) is spokesperson on the side panel. Though a small footprint, just how much floor space do you need to sell small packages of M&M’s, particularly in a Tower format? 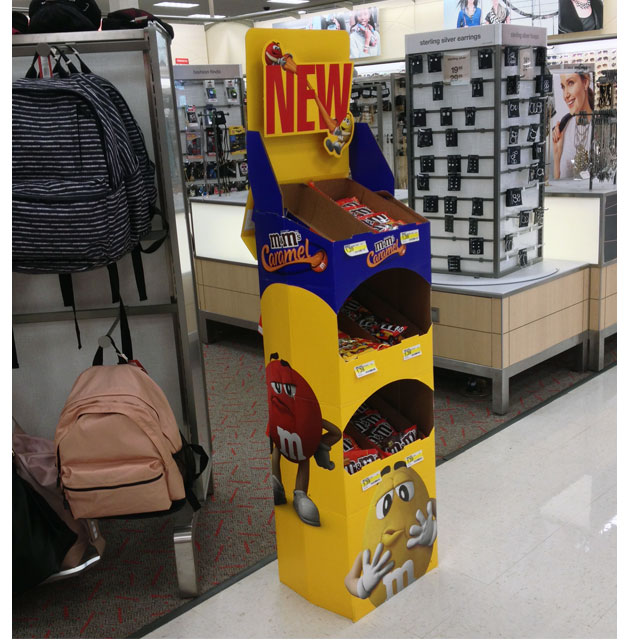 This floor stand image, provided by popon.net, was spotted in Target. Offering 3 pick points, the display calls attention to the caramel variant via the dimensional riser lug-on. The bottom portion features the red and yellow candy characters…………not sure if the bottom two bins were intended to be for their flavors? 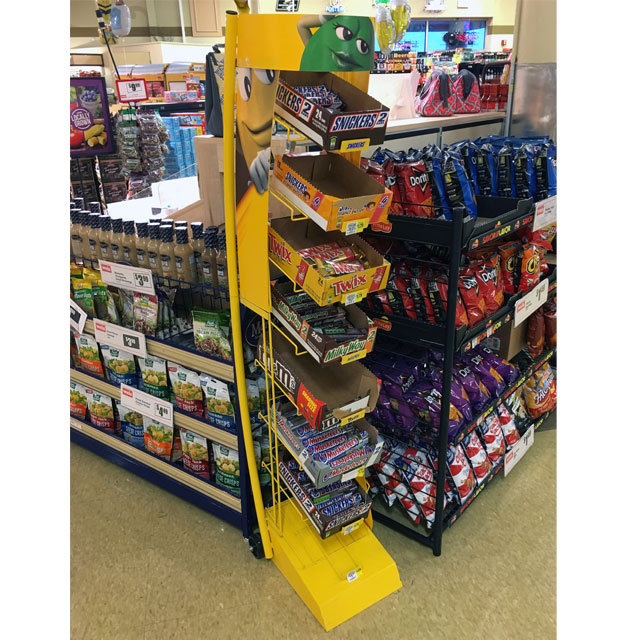 Yellow and Green are the M&M’s Character Curved Tower Display heroes here. Apparently totally successful merchandising, no M&M’s remain, and the Tower has been taken over by all manner of other candy offerings. If you look close, you will see one M&M’s carton remains, but it is empty. Love the wheels on the rear of the display which offer easy mobility to reposition the display at retail.

FixturesCloseUp LLC is a Limited Liability Company. FixturesCloseUp® is a Registered Trademark. The site is written and curated by Tony Kadysewski, a 20-year veteran of retail fixtures, 40-year veteran of advertising, Director of Marketing Communications at Trion Industries, Inc., and trained Engineer and Urban Planner, but the majority of fixtures featured have no Trion equivalent. Fixtures Close Up carries a Creative Commons Attribution-ShareAlike License. You are encouraged to copy, distribute, transmit, remix, adapt, and make commercial use of the work with only the requirement of attribution to the site and author, and likewise sharing of your use.

Bars. Baking. Hot Chocolate. Green & Black’s makes wonderful chocolates in each of these categories. All of their products are exquisitely delicious because they believe that every step of the chocolate making process is equally […]

Oil is Cool! This highly functional Parachute display was spotted at Spencer’s, Mumbai. The humble coconut oil has been repackaged for mass appeal and the brand’s communication at retail highlights its cool quotient with brand […]