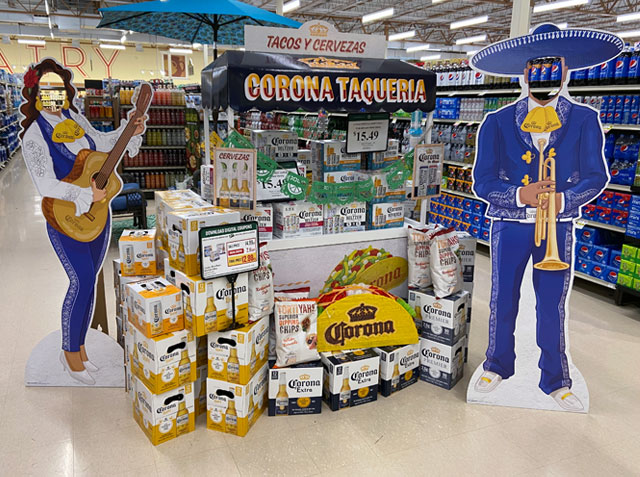 Cinco de Mayo is considered an important day in Mexico as it marks the day in 1862, when President Benito Juarez sent troops to face an invading French army that was marching toward Mexico City.

Every year, Cinco de Mayo celebrations are held across the United States with good food, beer and festivals. From the battlefield to the beer bottle, Cinco de Mayo has evolved into one of the country’s largest drinking holidays, especially for the Corona brand family of beers.

On a recent store check, we spotted a very cool Corona Taqueria display stand promoting the holiday along with several different Corona beers. In addition to creating a festive destination in-store, the display also encouraged shoppers to use one of their two photo stands to snap a few pics to get into party mode. Love the huge paper mache taco prop!

The Sky’s The Limit Balloon Display

May 17, 2018 Floor, Trending Comments Off on The Sky’s The Limit Balloon Display

The Sky’s The Limit With Gift Cards Whether graduating from elementary school or college, recognizing ones educational milestones and next stages in life are tradition. With graduations right around the corner, the debut of this […]

As most of you know, we have been busy transitioning over content from the old site to our new platform. Apologies for the delay on this one but we are pleased to bring you our […]

In recent years, Anheuser-Busch InBev’s “global growth and innovation team” ZX Ventures has invested in at least nine international breweries, and now the company is pushing into spirits. ZX Ventures today announced the acquisition of […]