Providing an overview of the campaign execution, Aaradhee Mehta, Chief Storyteller, BUYSTORIES, says, “We used the naked chip visuals liberally throughout the campaign elements along with the pneumonic. One, because it establishes the new format of Bingo! ‘Original Style’ and two, it drives impulse, which is what predominantly drives the category. We stayed with flat red backgrounds and lots of negative space because it was an effective way to highlight the key message aimed at the shopper in each zone,” she adds.

All elements that were placed from the outside of the store to the exit cash counter were designed and developed keeping in mind shopper behavior in that zone or part of the store. 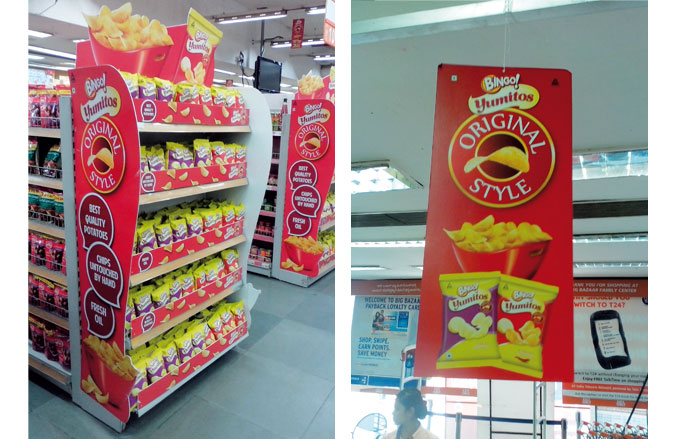 Gate and floor branding were used to register the category and lead shoppers to the bay to learn more about the superior quality of the product. Ceiling elements were also used as navigation signs, such as, danglers pointing towards the category or large chips falling into the bowl on the floor stand. These elements ensured high visibility for the product from various vantage points in the store. Other messages that served as variant communicators or reminder-to-buy were placed at the exits and end-caps.

Mehta adds,”Shopper messaging often fits into all elements on the concept board and every message in the store. For this project we worked with the client to develop an end-cap design that would be a complete message center, bringing all elements i.e. shelf strips, header, side flanges and floor stickers together. The three shelf strips used on the bay deliver three different messages – Best Quality Potatoes, Untouched by Human Hand and Fresh Oil. The design intent was to repeat all three messages on each shelf strip.”

“One can argue that this redundant treatment makes the activity maintenance heavy but we wanted to ensure visibility for each of the messages,¨ she says. 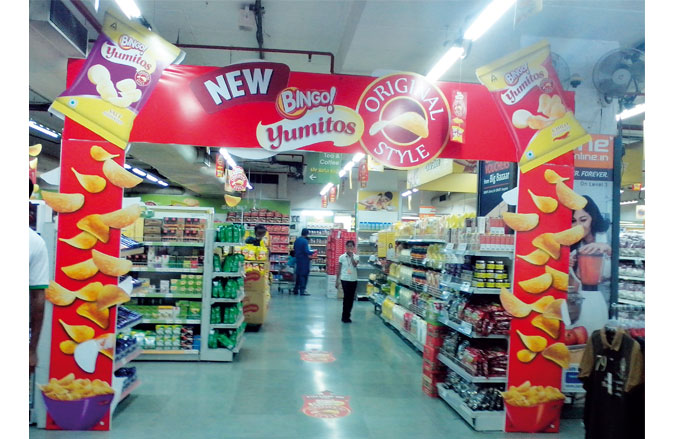 G K Suresh, General Manager – Marketing, Foods Business, ITC Ltd, says, “The final output from BUYSTORIES looked very good in-store and was well-received by our internal field teams. All elements had a distinctive role to play in the shopper journey. The work was unique, catchy and stayed within budget. They are also a good bunch of people to work with.¨ 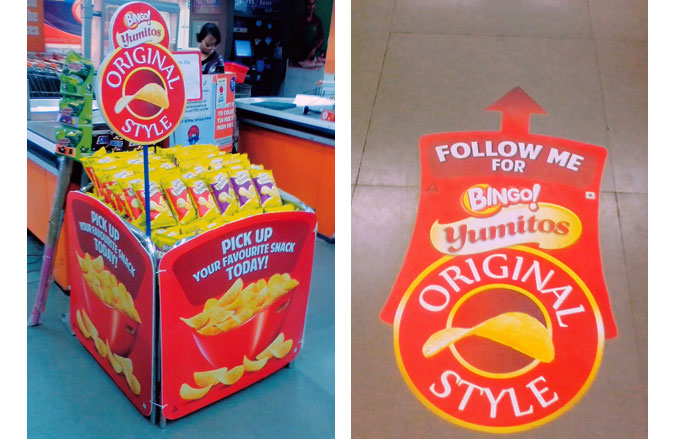 Shopper communication almost never has the liberty of going beyond creative elements used in mainline creative work. For example, a product shot, ingredient visuals, consumption visual and the copy are reproduced on in-store elements with variations in proportions and position.

Reason – maintaining consistency with the brand and campaign language is a non-negotiable. This Bingo! Yumitos campaign proves how an effective shopper marketing campaign can be successful without any compromise to the brand¦s identity.

Marginal budgets or no time to shoot fresh visuals for shopper communication cannot be excuses for shopper work that is not shopper right. Overall, the campaign aimed to ‘stop-inform-close-remind’ the shoppers. “Visually, the work was designed to look powerful and clutter-free inside the store. This was made possible for the Yumitos campaign as the elements were developed keeping in mind color, space and the visual noise of a modern retail store,¨ concludes Mehta.

With the leaves changing and cool weather rolling in, fall is in full swing and so are retail promotions offering limited-time products to celebrate the season. Since 1960, Little Debbie, a McKee Foods brand, has […]