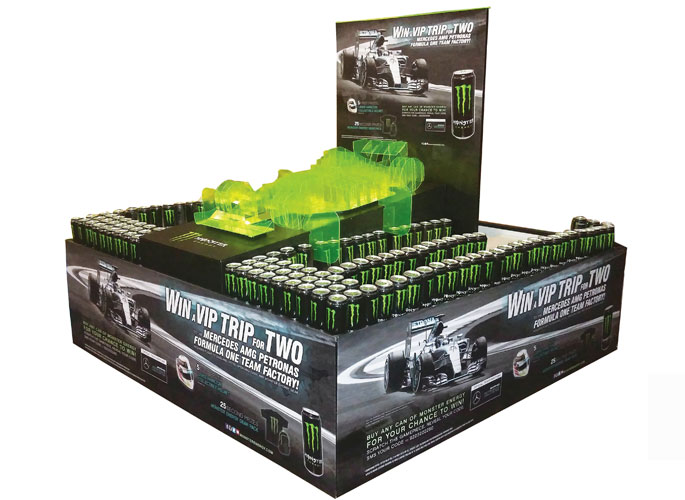 Based in Corona, California, Monster Energy is the leading marketer and distributor of energy drinks and alternative beverages. Known for their support of many extreme sports events, the brand recently rolled out an exciting promotion this summer in India that highlighted the partnership with their formula one racing team sponsorship. The contest offered racing fans several prize giveaways, with the grand prize being a VIP trip for two to visit the Mercedes AMG Petronas racing factory in England to have a first-hand experience on how a modern day F1 car is made. To enter, shoppers had to purchase a can of Monster Energy, scratch the game piece, then SMS their code to see if they won.

With regards to the creative aspect of the promotion……Balaji Murugesan, Director, Sab Creations says, “Our job was to showcase the partnership and contest in-store, which we did by using innovative materials and manufacturing techniques to create a unique experience. We were given a maximum space of 6 x 6 ft to use for all of the promotional pieces and the Monster product.”

Talking about the design, Balaji adds, “We created a skeleton dummy of an F1 car which later formed the centerpiece of the floor stack. The model was made of fluorescent (green) acrylic that gave an effect of lighting, although the unit itself was non-lit. We wanted to create an innovative display that would attract attention without the use of elements like lighting or premium materials, which might add cost. So we used florescent acrylic for the dummy and rest of the unit was made using metal and MDF.” 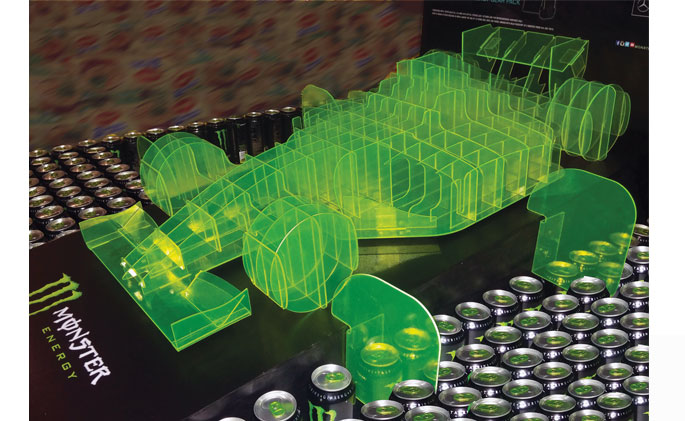 Sab Creations faced specific challenges in executing such a shopper-connective initiative, Balaji adds, “This was a venture into a lesser known territory on the basis of an idea, an inspiration that we wanted to bring alive. We wanted to transform the design idea into reality without diluting it. Aside from coordinating the campaign with all of our key teams, the biggest challenge we faced was the F1 car assembly, which was very fragile. In an effort to minimize damage, we arranged for video conferencing calls with the execution team who followed along while we assembled the F1 car in our shop. Being avid F1 fans, this display serves as an inspiration for all of us at Sab Creations.”

Trusted by millions of moms since 1984, Philips Avent is the #1 brand recommended by moms worldwide. The brand was recently spotted at Babies R Us using this motion display to merchandise their unique anti-colic bottles. […]

Get A Starbucks Bonus Card As we enter the holiday season, gift cards continue to be one of the most popular presents. For Black Friday and Cyber Monday this year, Starbucks is offering a $5 […]