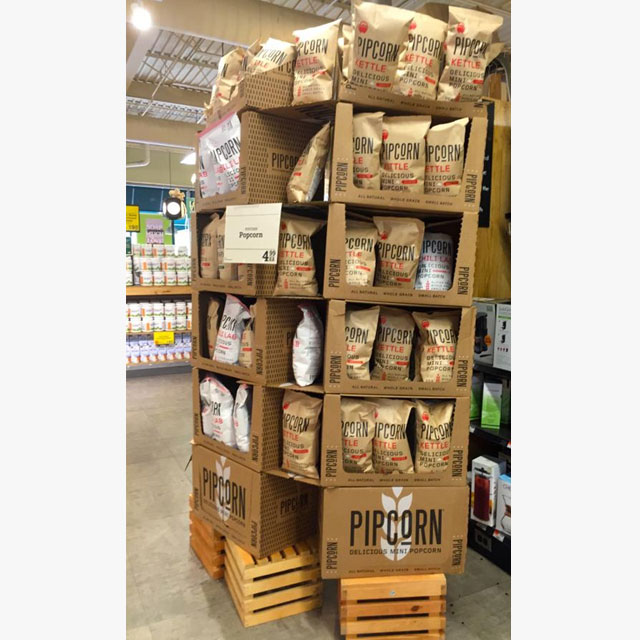 When brother-sister team Jeff and Jen Martin founded their company in 2012, they had no idea they were about to embark on a wild success story with Pipcorn, their innovative mini-popcorn product. Not only is the product unique in terms of its small size—the popped morsels are about half as large as traditional popcorn—but it is also all-natural, gluten-free, whole grain, and vegan. However, despite the fact that the product hit on all the right consumer trends, it’s no easy feat for a newcomer to break into the crowded snack space.

Pipcorn’s first break came in 2013, when Jeff and Jen were offered the opportunity to feature Pipcorn at the Smorgasburg Snack Bar in Whole Foods Market’s Bowery location in New York City. To maximize the opportunity, they realized it would be best to “make their own shelf space”—to get their bags into boxes that could be displayed on the floor, rather than on the shelf. With no immediate solution at hand, the Whole Foods offer was an ideal opportunity with a less-than-ideal expense and time crunch.

Brother and sister got to work quickly; quite literally, they flipped out. They went into a handful of stores and started flipping boxes so they could read the fine print to see where the boxes were manufactured. At this “box-flipping” stage of their admittedly less-than-scientific process, the Brooklyn-based duo was considering one factor over others: “Proximity,” says Jen Martin. “We had one shot at this, and we wanted a boxmaking partner we could physically see and touch before signing on the dotted line.”

Kellogg Company and TerraCycle struck a deal that will allow consumers in the United Kingdom to return empty Pringles cans starting in December. Through the new program, shoppers can send the cans to TerraCycle, which […]