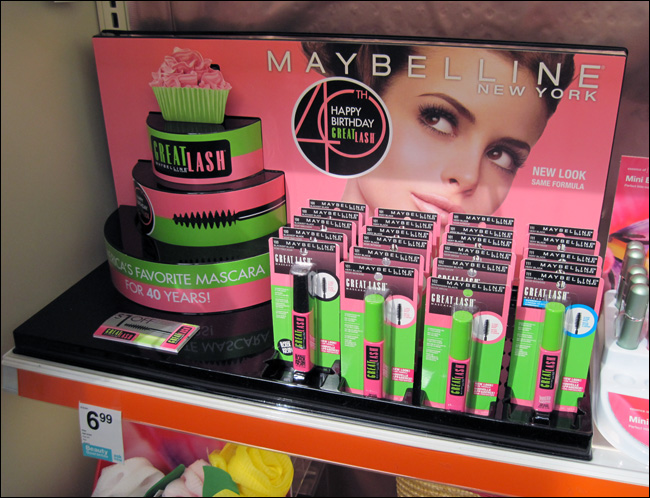 The product turns 40 this year and to commemorate the milestone, Maybelline has created a festive retail shelf display to kick start the party. In addition to the displays, they have also launched a facebook page that offers registration to win prizes which include a birthday weekend for two in NYC.

According to the LA Times, Great Lash is still the #1 selling mascara in America with over 20 million tubes sold each year. To break that down even further –  a tube of Great Lash is sold every 1.7 seconds in the U.S.

Maybelline offered consumers a present of their own with dollar off coupons which were affixed in front of the eye-catching cake. Several other cost saving initiatives such as bogos and online coupons were offered by major retailers to support the promotion.

A 3 tier birthday cake was designed as part of the display to draw extra attention to the 40th year celebration. Wrapped with graphics on every layer, the cake was topped off with a dimensional cupcake.
Holding 24pcs of product, the vacuum formed display really popped on-shelf. A large pink copy panel set the tone with a classic model image and happy birthday graphic icon. Consistent use of brand colors throughout added additional campaign support.

In addition to in-store promotions, Maybelline produced stylish limited edition packaging as well. Fashion designers Max Azria, Tracy Reese and Vivienne Tam put their creative stamp on the iconic packaging. Adding some glam to the tubes was very fitting since Maybelline is the official sponsor of Mercedes-Benz fashion week. The original pink and green tubes have been around since ’71.

Popon is pleased to bring you our third installment of cool POP displays, trends and ideas. Our vigorous store checking schedule presents us with numerous neat examples of designers and brands coming together to deliver […]

What’s In A Brow? If you ask the brow experts over at Benefit Cosmetics, they will tell you that brows matter. According to the company’s website, recent studies have shown that eyebrows may be the […]

Jesse’s Girl Dial A Lash Mascara Display Since its 2005 debut in the beauty industry, Jesse’s Girl has doubled its growth and maintains a presence in more than 3,000 U.S. based stores. With so many […]