Recently ranked one of the best shaving products by Men’s Health, Gillette’s Fusion Proshield marketers have teamed up with the popular magazine and Walgreens to promote each others brands.

Until 7/31/2016, shoppers can use their checkout redemption code to begin receiving a 1-year (10 issues) subscription to Men’s Health, compliments of Gillette. The promotion also offers the same subscription deal with the purchase of $25 or more of Gillette products. 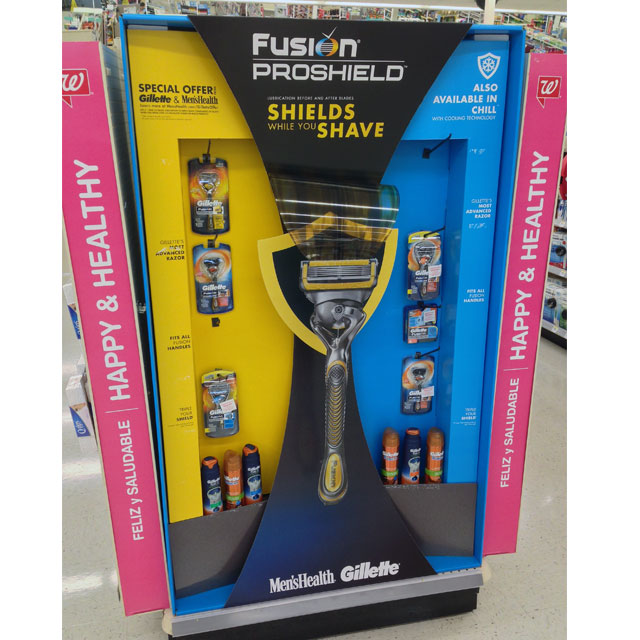 To promote the magazine sunscription giveaway, Gillette has launched this dimensional end cap display in Walgreens stores across the U.S. Incorporating several of the same assets from the initial launch of the razor, this end cap takes the visuals one step further with the 3D razor which divides the display into two sections.

Covering the yellow and black ‘brand shield’, the razor was printed on a clear, thin plastic that allowed it to ‘flex’, similar to a massive version of a shelf dangler. On either side of the razor, the brand offered the Proshield’s base razors as well as their chill option razor. Cans of shaving cream were also included in the assortment.

Popon is pleased to bring you our 12th installment of cool POP displays, trends and ideas. Our vigorous store checking schedule presents us with numerous interesting examples of designers and brands coming together to deliver […]