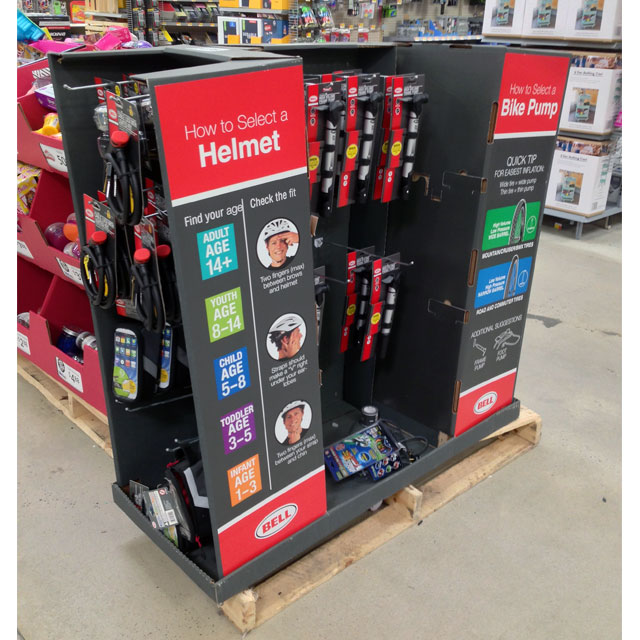 Founded in 1954 by Roy Richter, Bell has established itself as the world leader in protective headgear that is designed and built with purpose. Roy Richter spent his life removing the limits of what was possible — and his unlimited spirit has been Bell’s guiding light for nearly 60 years, earning the admiration, trust and loyalty of generations of champions. Throughout those years nearly every advance on the list of helmet “firsts” were built under Bell’s auspices. 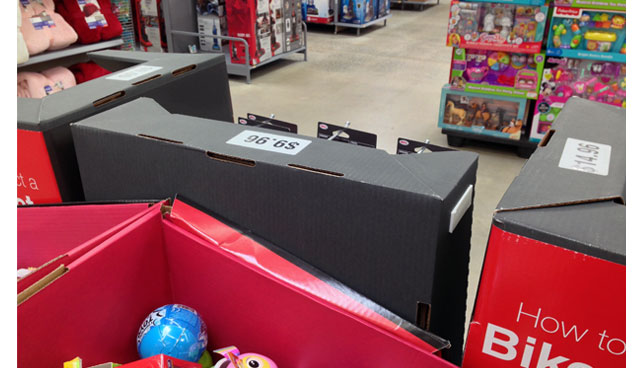 The brand was recently spotted in Walmart promoting their bike accessories with this half pallet display.

Insight – as you can see from these images, the top portion of the side trays have disconnected from the center tray.

There are several possibilities as to why the twin stick tape didn’t stay stuck.

With that said, a simple fail safe solution would have been to use another bottom cap on the top to keep all three trays tightly pulled together. It doesn’t appear that adding a top cap would inhibit access to the product……….just an idea!

If you want to view more Insights, click here.

Bell Self Sealing Side Kick

Berkley is a world leading fishing tackle company that is passionate about helping anglers catch more fish. For decades, Berkley has taken this passion, along with industry-leading technology, to create cutting-edge products for anglers who […]

Almost two weeks into 2019: how’s your fitness resolution going? With approximately 80% of resolutions failing by the middle of February, well-intended fitness enthusiasts sometimes look for resources to squash their bad habits and attain their […]

The Alpha Bounce, which made its debut earlier this year, is a running shoe that offers an adaptive fit and feel for runners and versatile athletes. The shoe’s design was inspired by an athlete’s […]