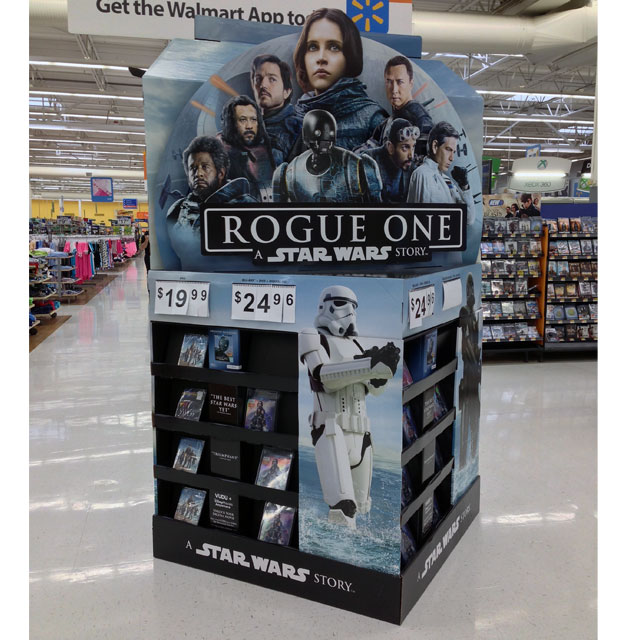 Rogue One: A Star Wars Story

Released in theaters in December 2016, “Rogue One: A Star Wars Story”, made its way into retail with the highly anticipated April 4th Blu-ray launch.

Rogue One is the first Star Wars film of its kind that was produced as an anthology story…….taking place before the 1977 original film, “Star Wars: Episode IV — A New Hope.” “Rogue One” is the first of three standalone anthology films set at different points within the “Star Wars” timeline. Touted as one of the best prequels to date, “Rogue One” has grossed nearly $532 million domestically. 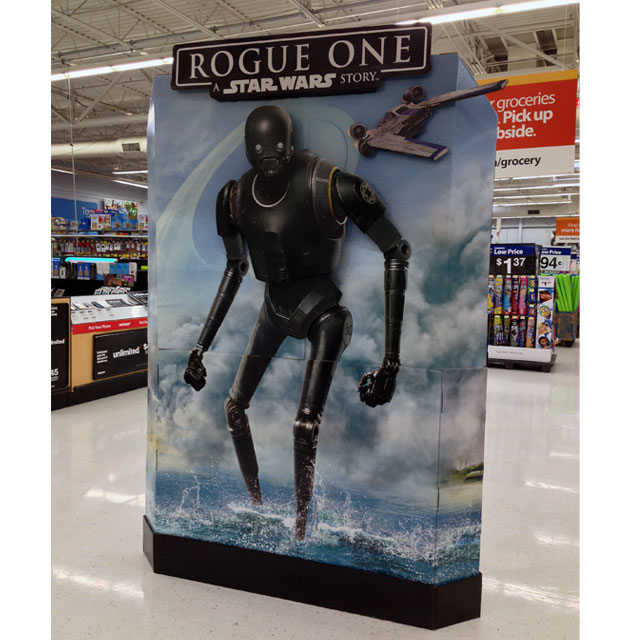 Lucasfilm and Walmart partnered up to deliver a limited-edition Blu-ray release of the epic adventure. Exclusive packaging and 2 star wars galactic connexions trading discs were part of the package merchandised out of this fabulous floor display.

“Never-before-seen ‘Rogue One’ bonus material will take fans behind the scenes with the movie’s diverse, dynamic cast and inspired team of filmmakers,” Lucasfilm representatives said in a statement. “An intimate collection of stories reveals how the film came to life, as well as hidden Easter eggs and film facts that audiences may have missed in the theater.”

The display was massive to say the least. Merchandising several facings, the wedge-shaped floor display took command of the aisle with a huge, layered lug on showcasing the cast. The wrap around graphics continued to the back of the display with a large image of the scene-stealing-droid-character K-2SO.

We look forward to checking out the other retail-specific “Rogue One” POP collateral and posting them in our gallery. If your company was involved with marketing materials for the movie and you are interested in sharing your story, please do not hesitate to reach out.

Ultra High-Definition (4K) video is the next big step in TV technology. While owners of 4K TVs aren’t totally starved of content, there is still a long journey ahead with most content available only by […]

Gillette has partnered with Warner Bros. Pictures new film Justice League to develop its grooming technology to meet the needs of powerful super heroes. Having already developed a variety of products that are engineered to be “The […]

Ummmm………….we’ve tried six ways from Sunday to wrap our heads around the reasoning behind the riser installation on this display but come up empty. Maybe a retail assembly instruction was provided with the display or […]