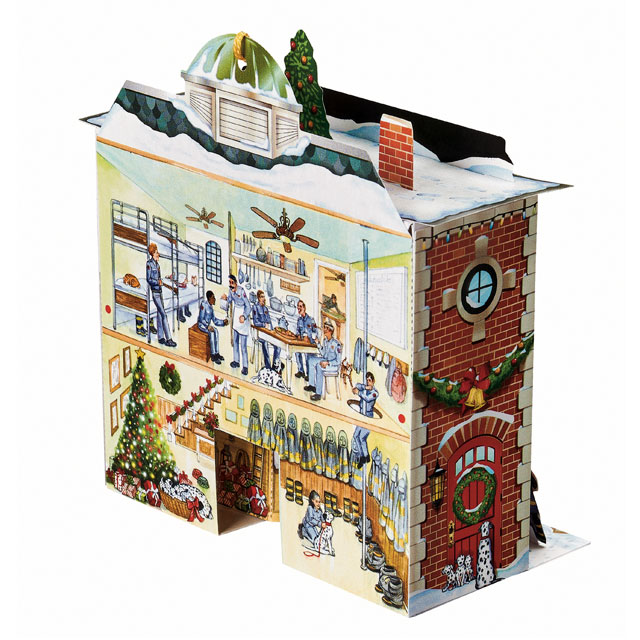 Graphics3, Inc. reached out to TFI Envision, Inc. to develop the illustration graphics for their new “Fire Station” Pop-Up Christmas Card Ornament for their 2019 catalog.

TFI Envision’s team began researching everything from the architecture of fire stations, to signage, fireman’s uniforms, fire station interiors, bunkrooms, fire engines and fire station life, and even the classic Dalmatian dog breed that was so readily represented in fire stations dating back to the 1800s.

Once general elements were agreed upon, TFI Envision’s creative team created black & white sketches to show overall concepts. Selected concepts were translated into more detailed, full color sketches to fine tune the overall design. The TFI Envision’s creative team collaborated with the Graphics3 structural team to refine the many die cut details including the stand-off elements (the fireman on the ladder and the fireman holding the shovel) to exactly match the many illustrations required for this complex pop-up. Every visible surface is illustrated – including footsteps in the snow; inside behind the firetruck; the closet in the back with holiday gifts; and so much more. The final illustrations are a mix of watercolor and digital artwork.

Thanks to the magic of great structural engineering and design, no assembly is required. 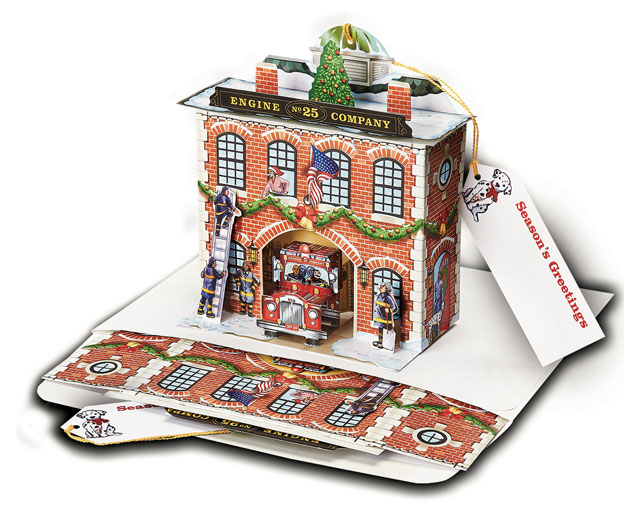 Meant to be mildly disgusting, this Mucinex Mucus-Mascot Cold Relief Display strives for negative attention. You know how you hate a cold and all that phlegm and mucus. “Nothing Lasts Longer” and “12 Hour Relief” […]

Spring Is In The Air

March 26, 2016 Articles, Ceiling, End Cap, Floor, Mini Wing, Pallet, Side Kick Comments Off on Spring Is In The Air

Spring is upon us and with that, so are numerous in-store promotions for the Easter holiday. According to a recent survey conducted by NCA, it projects this year’s domestic retail sales of Easter candy will […]

Earlier this month, GlaxoSmithKline officially launched its Flonase Allergy Relief onto store shelves at drug, grocery and mass retailers nationwide. Flonase is the first and only over-the-counter (OTC) nasal spray that offers relief for the […]