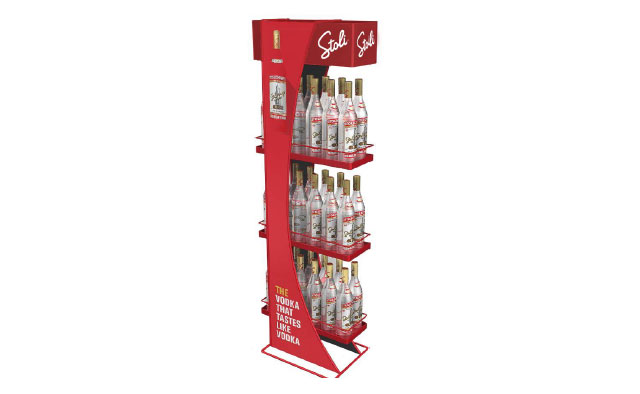 THE CUSTOMER
“Stoli is an iconic brand. We have 80 years of history. Most vodkas, when you look at them, they’re 20 years,” said Mike Oringer, Senior Vice President of Innovation and Trade Marketing, Stoli Group USA.

Alongside that history, he added, “We’re reinventing our brand continuously and innovating in the category, and the retailers want to utilize our point of sale merchandising tools.”

“We really view ourselves as an entrepreneurial company,” said Oringer. When he joined Stoli Group USA three years ago, the company had just been founded as a subsidy of SPI Group. They were tasked with reorganizing branding and being the importer and distribution channel for U.S. consumers.

“We had a goal of really started fresh and executing big,” he said, adding that this goal meant assessing operations at every level.

CHALLENGE
“We wanted to supercharge our brand and spike the growth. We went out and hired … new people. We explored our agencies. We explored all our messaging,” Oringer said.

The realization from that review was that, from a marketing standpoint, they had a huge opportunity to help build the brand.

“Our primary goals were we wanted better alignment, better communication, faster speed to market, and we wanted to cut out … unnecessary expenses from our system,” he said.

The team understood the need to “reallocate our monies. We also needed to reallocate how we communicated to our consumer with messaging,” he said.

First, they sought out a new vendor to help achieve those objectives and “help build the brand and better communicate brand positioning below the line,” he said.

The team then began working with distributors hand-in-hand, he said, and learn to invest where the business is. They discovered that they were spending “80% of our money in the on-premise outlets and we were doing close to 60% of our business in the off-premise. So there was a disconnect on our spending to where we’re trying to reach.”

They needed to get 60% of the spend in the off-premise channels, meaning display merchandising, corrugated displays, header signs and window displays.

“We never offered that. We simply offered all the tools that would go on the bar — the shakers, the napkin caddies. That’s not where the real drivers of our business was. We needed to take care of that too,” he said.

By investing in the right ways, and in the right channels, Oringer and his team wanted to see growth in three KPIs:

On more cocktail menus
They had other concrete goals as well, including taking out at least 20% of costs.

CAMPAIGN
With the goal of being two to three times faster than what was currently in place, Oringer added that they wanted to be able to put marketing ideas into that play that were executable the first time around.

“We didn’t want to have to go back and go from creative back to production and go back and forth multiple times,” he said.

In-house, his team is very lean, Oringer said, with a marketing department of only 10 people.
“We didn’t have the resources to do things in-house. We knew that we wanted to have streamline communications and we needed turn fast,” he said.

To accomplish their overall goal of speeding up each process that gets product to customers, Oringer knew they would have to address five key areas feeding into one main objective.

“The ultimate goal is to sell more Stolichnaya. We need to give bartenders, restaurant owners, liquor stores reasons to take in more of our Stoli products on the pull into the store and the push out of the store,” he said.

Step #1. Optimize communications between in-house team and agency
At first, Oringer and his team identified that there was, in fact, an issue.

“We were getting to market late. We were spending a lot of money. We were spending more money on agency fees than we were spending on actual products hitting the marketplaces — point of sale, merchandise, equipment, below the line programming. We knew that was a major gap,” he said.
So to begin the process after identifying the problem, he said, they issued an RFP, or Request for Proposal.

“We reached [out] to other companies in the spirits world. A couple of us come from non-spirts backgrounds in the consumer products world. So we reached out to very strong below-the-line agencies, creative agencies to help us with the challenges,” he said.

Through word of mouth and recommendations, Oringer and his team narrowed down to seven or eight agencies. After reviewing all of the initial proposals, “we narrowed it down to three and then we gave each of them an assignment.”

The agency they selected achieved all of the goals Oringer and his team wanted, including:

November 4, 2017 Brands Comments Off on Second Biggest Spiced Rum Brand In The World

Unlike vodka and tequila, which have both seen a resurgence in recent years, rum doesn’t lend itself to craft cocktails in quite the same way. Yet, that hasn’t stopped a relatively small rum brand from […]

November 13, 2018 Brands Comments Off on Malibu and Kahlua Living Lab Enhances Their Brands

Pernod Ricard-owned Malibu and Kahlúa are launching a brand new technology demonstration and rapid prototyping space at their global headquarters in Stockholm, a city second only to Silicon Valley when it comes to creating successful […]