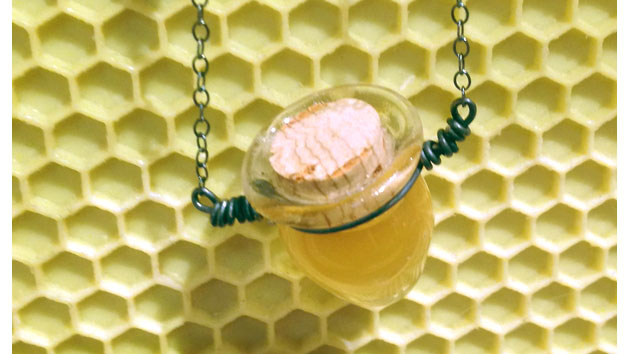 The amount of honey in this jar is as much honey as one honeybee can make in its lifetime. One-twelfth of a teaspoon. This hand-blown glass vessel is a reminder that we are dependent upon the smallest things & that one bee is as important as any other creature.

The Role Of The Bee

According to Greenpeace, since the late 1990’s, beekeepers around the world have been observing the mysterious and sudden disappearance of bees resulting in an unusually higher rate of decline in honeybee colonies. Several factors such as disease, loss of habitat, chemicals and pesticides, to name a few, are contributing to their decline.

Our lives depend on theirs. Did you know that a third of the food that we eat depends on pollinating insects? Originally brought over by the Europeans, honeybees are not native to the U.S. They eventually adapted to life in the states and now contribute $14 billion dollars to the value of U.S. crops on a commercial scale.

As noted on NW Honey Bee…..

Take a second to think of what honeybees pollinate…..fruits, vegetables, the herbs we use to season our foods, nuts, berries, cotton for clothing, clover and alfalfa which is the main feed for the cattle industry from which we get yogurt, milk, cheese, butter, ice cream, dairy and beef. Also, coffee beans depend on pollination for increased yields, think of Starbucks and your morning coffee. There are flowers for our holidays, beeswax which is used in the cosmetic industry, and lets not forget honey! 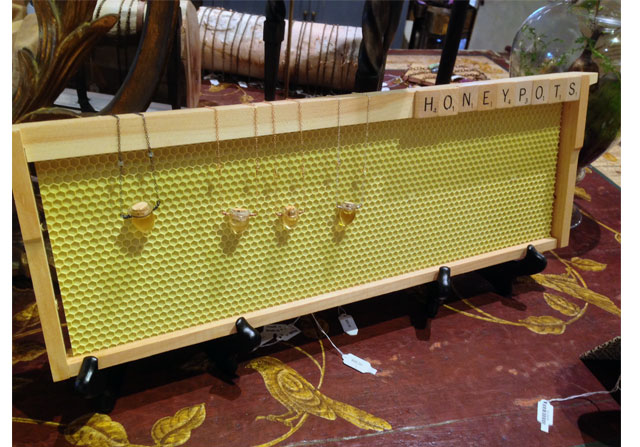 On a recent excursion, we happened upon a very cool mountain-town shop which is where we found the display that inspired this post. Shown above, the hand-crafted table display brings artistry and awareness to a very important cause. Designed to resemble a beehive frame, the display quickly conveys the ‘bee theme’ along with the little honey pot necklaces draped over the top . Would have been interesting to see the area to the right of the product being used as promotional/educational space. Nice touch using scrabble letters to represent the brand name!

A portion of the profits of sales from the honey pots will go to the non-profit organization Bee City USA, which provides spaces and habitats for pollinators to reside so they can serve their natural purpose.

Trending POP In-Store : Edition 6 Popon is pleased to bring you our sixth installment of cool POP displays, trends and ideas. Our vigorous store checking schedule presents us with numerous neat examples of designers […]